In 2019, I wrote on the topic of discovering which features interact in a model agnostic manner, using an approach from a paper by Friedman and Popescu entitled Predictive Learning Via Rule Ensembles. I wanted to revisit the topic briefly and expand on it somewhat, given that scikit-learn has progressed a bit since then.

First the good news: scikit-learn has added support both for permutation based feature importance (and should now be your go-to approach instead of the feature_importances_ attribute) as well as support for partial dependence plots. ICE plots are also supported in the latest version through the kind parameter.

Since plot_partial_dependence supports two-way interactions as well, this by itself already removes having to depend on lots of other libraries (though I still recommend rfpimp, if only for their more explicit handling of feature correlation).

Recall that we had defined two versions of the H-statistic in the previous post:

And that we had implemented these as follows:

The second order measure function is based on the implementation in sklearn-gbmi, but looking at it now I am not 100% convinced its interpretation of the measure is correct. First, it returns `np.nan` in case it turns out to be higher than one (which technically, can actually happen, so I have amended this in the code above). Second, it flips the sign around for every group size, though the original paper states that:

This quantity tests for the presence of a joint three-variable interaction […] by measuring the fraction of variance of H(jkl) not explained by the lower order interaction effects among these variables. Analogous statistics testing for even higher order interactions can be derived, if desired.

Based on which I’d probably use the following instead:

I’m leaving it as is since we’re not going to explore four-way and higher interactions (for two and three-way interactions, both give the same result), but I am open to hear what the correct interpretation would look like.

Both of these need a calculated set of f_vals: partial dependence values, which basically boils down to centered predictions of our predictive model for all possible subsets of features predicted over the same data set, either based on the original train/test data set itself, or a synthetic one constructed over a grid.

We’ll investigate three different implementations on how we can obtain these F values. As a somewhat realistic example, I’ll use the California Housing data set and train a straightforward random forest regressor 1:

Our model is (as expected) doing well enough for the purpose of the example, and we can also plot the feature importance rankings using both the old (impurity) and new (permutation) approach:

Note that this already highlights that permutation-based importance gives a less biased view.

Nevertheless, our focus is on discovery of interacting features. With the tools at our disposal, one would normally do so by:

For example, taking a look at the ICE plot for HouseAge: 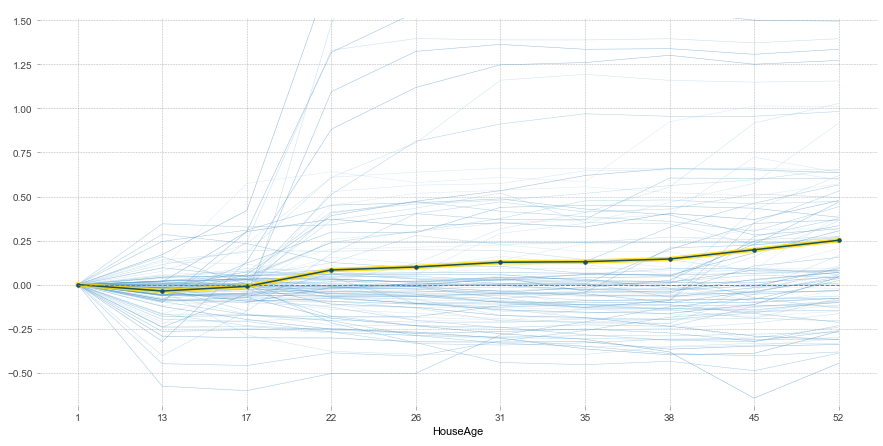 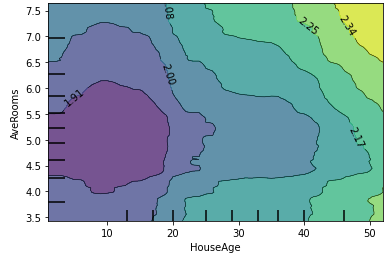 Indeed, on average the price increases for older houses, but we do see that it is strongly dependent on the AveRooms variable as well (e.g. for HouseAge between 30-40, the prediction ceteris paribus stays relatively flat, but not when taking into account the AveRooms feature).

For most uses cases, this is in fact quite sufficient to inspect models reasonably well. Still, let us now consider the H-measure 2.

In the previous post, recall that we had modified pdpbox to calculate partial dependence values (our F values) for higher-order interactions. This still works with newer versions of pdpbox, and supports both using a given data set as well as a grid-based synthetic one, but sadly breaks down for non-toy data sets with more features as iterating over all possible feature set combinations becomes too computationally expensive.

We can, however, limit ourselves to applying the second-order test on a chosen subset of features:

The reason for this is due to the fact that creating a synthetic data set over N features and m values per feature leads to m^N instances being created. Strangely enough, however, the implementation remains slow when using the given data set itself instead, as in:

The reason for this is most likely due to pdpbox‘ internals (I suspect because of its tendency to calculate individual ICE-style dependencies and averaging those rather than a true PD approach).

Since scikit-learn now supports partial dependence plots directly, we actually do no need to use pdpbox any longer. Note that plot_partial_dependence can only handle two-way interactions, but the partial_dependence function does in fact work with higher-order groups:

There are a couple of drawbacks here as well, the first one being that I’m taking a memory-hungry cartesian product of the results of partial_dependence, just so I can stick to the same synthetic grid and use pd.merge.

As such, we are limited to a second-order H-measure with a limited subset of features here as well. Trying to work around the cartesian product doesn’t even help a lot, as partial_dependence itself with run out of memory when trying to execute it on all features:

Note that you can lower the grid_resolution parameter (the default is a high 100), but in the end we’re still dealing with m^N instances being created. As a second drawback, the scikit-learn implementation does not support passing in your own custom grid.

Still, we can apply it for a limited sets of features:

The results are more or less comparable to the ones obtained using pdpbox (probably even a bit better as the default grid resolution of scikit-learn is higher by default).

Also, at least this approach is (barely) fast enough to brute force our way through all possible two and three-way interactions and rank them on their second-order H-measure (when using a lower grid resolution).

Finally, we can of course also calculate partial dependencies ourselves and stick to a given data set instead of creating synthetic examples.

It does make the results less precise, but this is fast and good enough for general exploration.

We can now perform our first order test:

We can also show the top ten second order results:

As Christoph Molnar discusses in his interpretable ML book, the Friedman H-statistic is not perfect: