A student once asked me whether it would make sense to tune the probability cutoff (a.k.a. threshold) for random forests. Let’s explain first what we mean by that exactly. Assume a binary classification setting. Say we’ve trained a single decision tree. We know that the prediction is given by the leaf node, and that a probability P(y=1|x) can be assigned by the number of training examples in leaf node with positive outcome divided by the number of all training examples in leaf node (note that this is a fixed ratio for each leaf node and does not change once the tree is trained). This is not a well-calibrated probability, but does allow to rank predictions.

Given such a probability P(y=1|x), it is then possible to specify a threshold T so that if P(y=1|x) >= T, we assume the outcome to be 1, and 0 otherwise. We can then tune T (e.g. through cross-validation) to get an optimal cutoff point given a metric we desire to optimise (accuracy, F1, or something else…) 1.

Let us now consider the case of a random forest: N trees are constructed which all provide their prediction for a given instance, after which the majority vote determines the final outcome. Again, a probability P(y=1|x) can be assigned as the number of trees which predicted y=1 divided by N.

However, we’ve kind of forgotten about the fact that every tree member itself can output a probability as well. What if we would tune the individual trees with a threshold Tn, with n = 1..N? Would this lead to a better result? The answer is that it might, but only in very specific circumstances, and is hence probably not worth doing.

First, most implementations of random forest construct non-pruned trees. E.g. each leaf node relates to one training example. This doesn’t lead to overfit thanks to bootstrapping and random feature subset selection. As such, the probability that P(y=1|x) is either 1 or 0 for each tree, and threshold tuning would not make sense here.

Second, many implementations (most notably scikit-learn) in fact deviate from the behavior of random forests as originally described. Instead of letting each tree vote and having the final probability of the ensemble equal P(y=1|x) = number of trees which predicted y=1 / N, they instead average the probabilistic predictions of all members, i.e. P(y=1|x) = Σ(for n = 1..N)[ Pn(y=1|x) ] / N. This also avoids the problem of individual tree tuning altogether.

If you’re curious, see this tech report by Leo Breiman. Using averaging gives smoother probabilities. Again, note that this doesn’t matter under the default assumption where we build trees all the way down.

But what happens if we do limit the depth of trees?

This is easily tested, e.g. by means of the following example churn data set:

We can then implement our own predict function which accepts a threshold:

And comparing it with the original score: 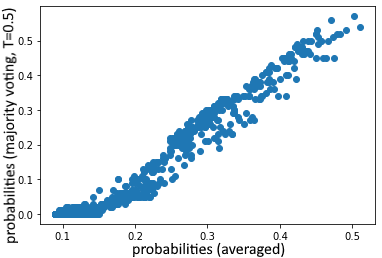 We can then tune the threshold (on the training set, to play it safe, but you’d normally cross-validate this):

Interestingly enough, the best threshold appears to be around 0.10: 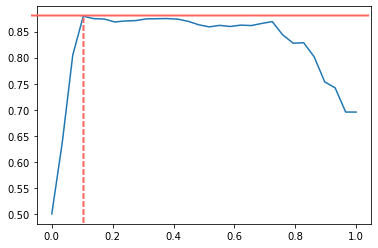 With these final test set results:

As can be seen, this best threshold comes close to our averaged value. When repeating the run with a different random seed, we can find cases where the best threshold does slightly better. So what to take from this?

So in short: stick instead to the basics.