I’ve been interested in computing since I was a kid. The ability to tinker with the internals of a machine, the brutalism of DOS, Windows 3.1 and Windows 95’s interfaces (those big grey buttons)… It was a great time for young persons to get started with IT, programming, and anything computer science. A great time to actually create something using a completely new medium, a digital canvas.

Today, a lot of things have changed. Many for the better, as you could argue, but it seems to me that computing today is “just not the same” anymore. The web has come around. Everything has to be touch and haptic, 500ms animations all over the place, hiding away the complexities behind, but also the potential for discovery, learning, and true creativity.

Over the past week or so, I’ve been jotting down a list of small annoyances. Not one of these is really a deal breaker on its own, but put together, it is clear — at least from my perspective — that a lot of things have changed. And I’m not the only one that thinks so (more on that later).

On Windows and Interfaces

Interfaces in general have become horrid. An interesting discussion on Twitter has lots of people talking about this (funny that a separate website is needed to kind-of properly render out a list of tweets in a somewhat readable format):

amber-screen library computer in 1998: type in two words and hit F3. search results appear instantly. now: type in two words, wait for an AJAX popup. get a throbber for five seconds. oops you pressed a key, your results are erased

A lot of this comes from web-design-creep, but a lot of other things are to blame as well. In a way, I miss ugly, brutalist but completely focused and clear interfaces like this: 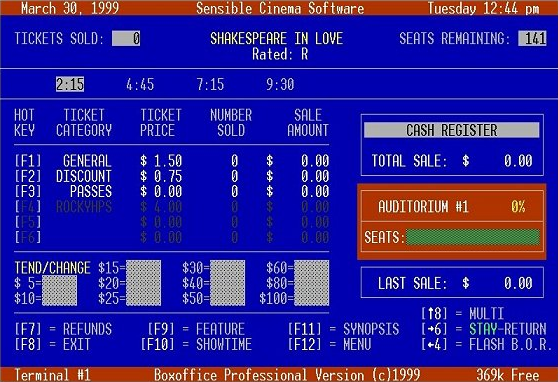 Keyboard shortcuts only, true, though the focused field is clearly visible, with global menu items that clearly indicate where you’re going towards. Even Windows 3.1 was actually very powerful in this sense:

Buttons are buttons. Simple as that. Look at their crisp outline and how they pop off the screen. Everything about this screams “you can click me and I will do something”.

This went fine until Windows 98 came along, where you see the first evidence of the web’s tentacles getting inside the OS: 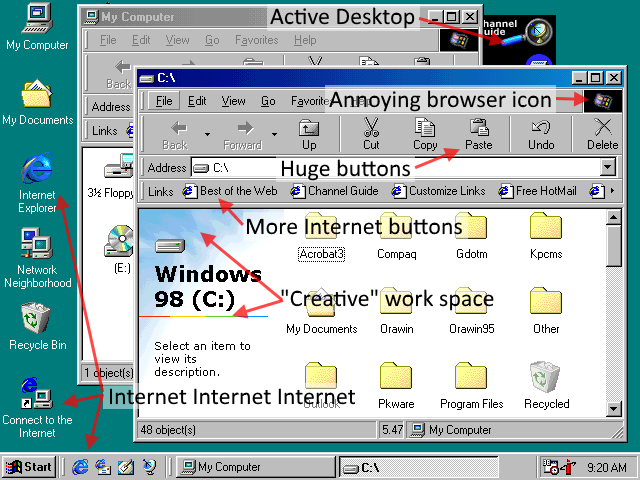 What is this? Why does there need to be a cloud in my explorer window? Just because we can? To show that we can render 256 colors now. Buttons have become larger, though for what? Meanwhile, Active Desktop was a thing for a while that polluted the desktop with Internet page widgets. Even Vista tried to do this again with gadgets or whatever it was called. So many distractions, so many design inconsistencies.

But at least, we lived in exciting new times then.

Today, we’re surrounded with boring, flat interfaces that sacrifice usability in order to looks a clean, neutral, and uninspired as possible, and where any piece of text on the screen can turn out to be a “link” that can be clicked. Good luck, dear user! In a way, Windows 3.1 manages to look quite pretty and clear in written text, as https://hackernoon.com/win3mu-part-1-why-im-writing-a-16-bit-windows-emulator-2eae946c935d, written by a chap who’s working on Windows 3.1, shows. I’d even tip my hat to Dropbox for going with some fresh design ideas instead of the bog standard translucency-animations-whitespace combo. Speaking of whitespace: try switching your Gmail display mode from “comfortable” to “condensed”. The first certainly does not make me “comfortable”.

It’s time that we start to rething interfaces. I find it strange to be looking at projects such as Lanterna or blessed-contrib and go “wow, that looks neat!” I’m not calling for a return to 80x25 CP427 or 3270, especially not after having worked with those in a mainframe environment, though there is a certain “once you get to know it, it actually works fantastic” vibe present in those, a sentiment which I’m sure is shared by e.g. vim users as well.

On Devices, Apple and Linux

I’m not done yet.

But at least programming is still a blast?

Oh, and speaking of data vomit.

Back to the Web

The web is dying as well. Does anyone remember websites words it perfectly:

Does anyone remember websites? These might be unfamiliar to anyone unexposed to the internet before 2005 or so, and may be all-but-forgotten for many others, obscured by the last 10 years of relentless internet development, but before mass social media platforms and amazing business opportunities on the internet, it was largely a collection of websites made by people who were interested in some subject enough to write about it and put it online. Does anyone remember when you stumbled on a new website written by some guy and read his first article, then clicked back to his homepage and saw he had a list of similar articles that looked like they’d be just as interesting.

That was great. The web was fun back then, a treasure trove of badly formatted but interesting or fun, plain pages. A lot of things I’ve used and am still using today in my research (from AI to evolutionary algorithms to cellular automata) I’ve learned from pages like this (still remember days reading http://www.ai-junkie.com/ann/som/som1.html when I was about 16 years old!).

Others have said this as well.

I’ve been watching some nostalgia tech channels on YouTube recently. Things like Lazy Game Reviews, DF Retro, and The 8-bit Guy. Seeing these machines of old not only reminds us (or me, at least) of how far we’ve come, but mainly how simple, honest, “straight-to-the-metal” these things were.

I kind of miss that feeling.

What has happened with “computing” as of today? Perhaps — most likely — all of this is due to me getting older, more busier, less easily impressed, or simply a case of nostalgia goggles firmly stuck on my face, but I can’t shake the feeling that computing today has lost a lot of its appeal, its “magic”, if you will, compared to the days of old.

Today, we have an unfinished OS running on twenty devices, DRM schemes crippling our computing freedom, interfaces that are confusing and buggy, a web controlled by a few companies which are corrupt and manipulative, and full of Russian ads and propaganda spreaders and youth that is addicted to social media.

I used to laugh (silently) at “dinosaurs” I’d meet telling me about how all of this new stuff already existed in the eighties. I still laugh (silently), as I can still gleem in the fact that I at least try to keep up to date with all these new developments whereas they have given up and perhaps just want to emphasize their relevancy, but I’m feeling increasingly more sour as I start to wonder towards where, exactly, we’re trying to “evolve” to.