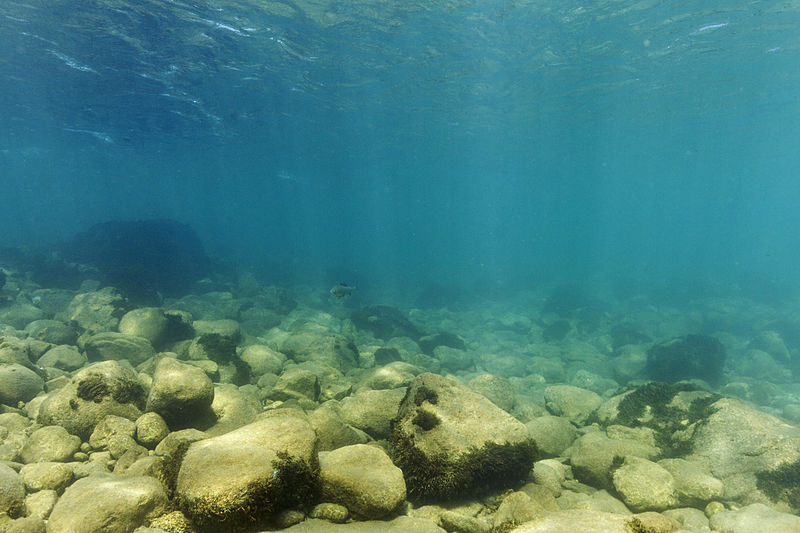 This post is the second part on a small series on cellular automata and graph based systems as found in games. Part 1 can be found here.

In our last past, we ended up with a general framework to construct cellular automata. To refresh, a cellular automaton is a discrete simulation defined over a grid of cells, each one of which is carrying a state. For each cell, a set of cells called its neighborhood is defined relative to the specified cell. From an initial state, a simulation is started where each new generation is created according to a set of rules that determines the new state of each cell in terms of the current state of the cell and the states of the cells in its neighborhood:

Left up to us is to:

Let’s now expand on this framework to simulate fluid dynamics as similarly as seen in games such as Oxygen Not Included, “falling sand” games, and so on.

The main change we need to perform is to the definition of a cell’s state. Contrary to what we’ve been working with so far, our state now is going to be a tad more complex, allowing for some flexibility:

Regarding the rules to determine the next generation, we’re going to work with the concept of flow. Our rule system will be based on a general framework adhering to the following rules:

Let’s try out this approach using a simple system: one with sand and floors.

You can play around with the result here. Tip: pressing o cycles through the different material types to draw, p (un)pauses the simulation, d toggles debugging mode. Press r to reset everything. You might need to click inside first to give the iframe focus.

This basic example is not that impressive yet. Let’s change things up a bit by defining a system for water instead. Our update rules now look as follows:

getWaterSideOutFlow is a helper function which determines how much water should be flown out to the left and right respectively to reach a “stable” level:

Of course, we could play around with this — a much easier option is to move water around to the left or right randomly (which is the option many systems go for), though this leads to a kind of jittery effect.

You can play around with the result below. Again: pressing o cycles through the different material types to draw, p (un)pauses the simulation, d toggles debugging mode. Press r to reset everything. The simulation below starts from a preset scenario, though feel free to play around with this (break a hole in one of the walls, for instance). One interesting aspect you’ll note is that this simulation does not adhere to “real” pressure dynamics (i.e. modeling “communicating vessels” is not working here). This is another aspect most cellular automaton based systems fail to model correctly and something we’ll fix in a bit.

Let’s expand on the previous example a bit to fix the communicating vessel issue. First, we’ll add to general purpose methods as follows (note how the “remaining” variables come into play here):

These will be used to update down/upwards (vertical) and side (horizontal) flow respectively, with several parameters to set to determine the “stickyness” and so on of horizontal flow.

This is handled by the following functions:

Putting everything together in our update rule set:

We get the following result. Again: pressing o cycles through the different material types to draw, p (un)pauses the simulation, d toggles debugging mode. Press r to reset everything. Note how the “vessels” now stabilize (try filling up one side by drawing some water in the air):

Expanding on this system is now relatively easy. The following simulation defines three new material types: lava, steam, and ice. Cells that mix lava and water will convert this water to steam, which flows upwards in a more random manner (to allow steam to linger in a cell from time to time). When steam touches an ice block in one of its neighbors, it converts back to water. The teleportation trick is only used for water in the simulation below:

You can play around with the result below. Again: pressing o cycles through the different material types to draw, p (un)pauses the simulation, d toggles debugging mode. Press r to reset everything. The initial setup loads in a closed system where water is heated, cycled, and cooled down:

We’ve now seen the basics regarding the use of cellular automata to simulate simple systems. Based on our framework we have constructured, it’s now easy to add in further material types and interactions.