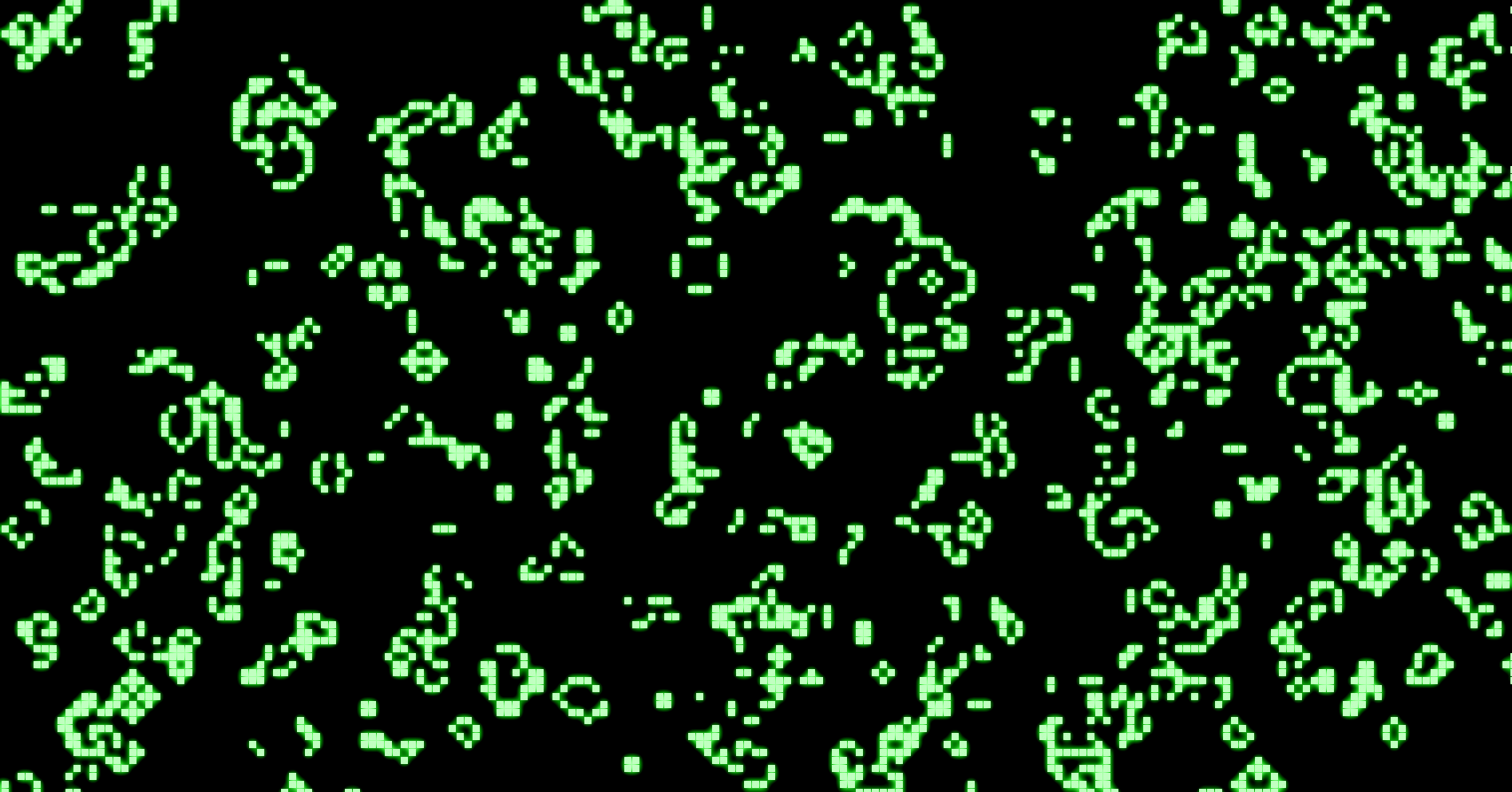 I’ve been spending way too much time with Oxygen Not Included. It’s a great and addictive base building game with lots of challenges to tackle, though the most interesting component — for me, at least — is the way how the game simulates the behavior of gasses, liquids, temperature, and elektricity. 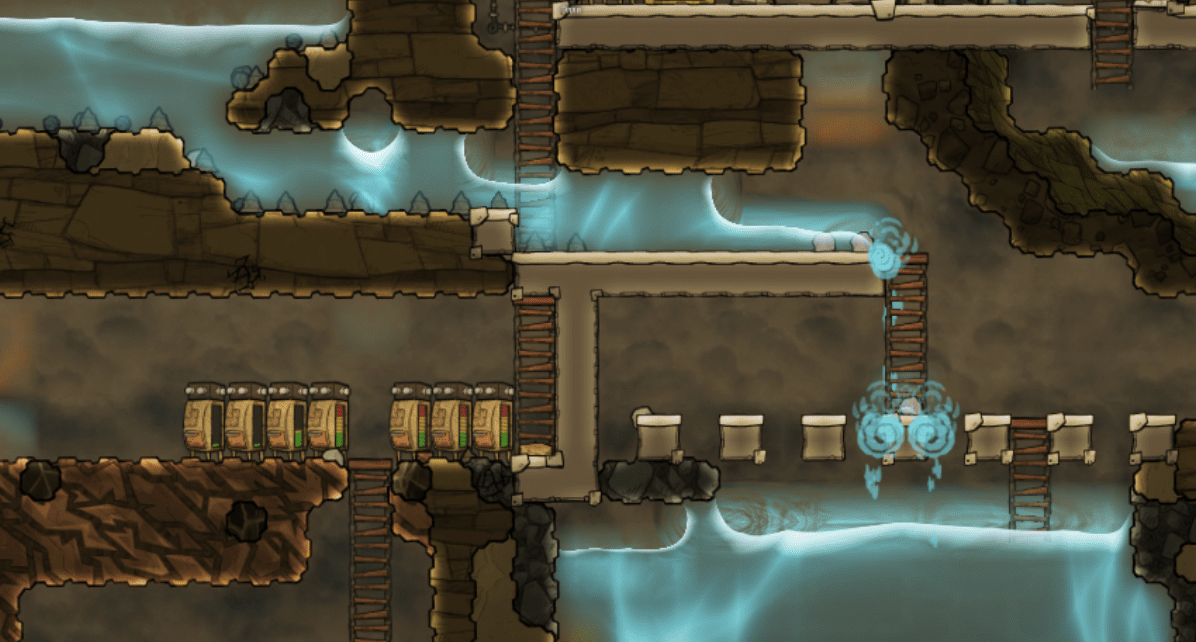 Oxygen Not Included is certainly not the only game incorporating similar systems. Minecraft, of course, does the same with water, lava, and redstone (albeit in different ways), and so do other games like Cities: Skylines and the more recent SimCity incarnation:

Once you start noticing these systems, you see them popping up everywhere, from simple mobile games like The Sandbox to little “falling sand” web games. 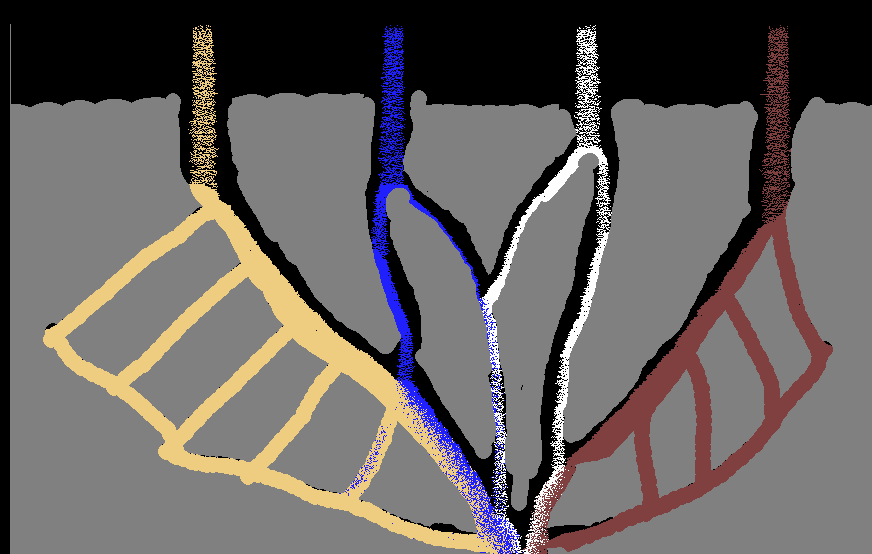 Many of these games’ systems are based on the same underlying fundamentals. In this series of articles, I’ll go through explaining two popular concepts and how they work inside such games: cellular automata, and graphs. As a side goal, I also wanted to take the opportunity to play around a bit with p5.js to visualize and create such systems.

Cellular automata have been around for quite some time already (originally discovered in the 1940s by Stanislaw Ulam and John von Neumann). A cellular automaton is a “discrete model, consisting of a regular grid of cells, each in one of a finite number of states” (Wikipedia). For each cell, a set of cells called its neighborhood is defined relative to the specified cell. From an initial state, a simulation is started where each new generation is created according to a set of rules that determines the new state of each cell in terms of the current state of the cell and the states of the cells in its neighborhood. In basic terms, this defines a “main loop” over our grid as follows:

That’s the basic idea, and it’s this system that is driving all the water, sand, … systems in the games listed above. Of course, the main interestingsness from using this approach comes from the pieces left to you to plug in, namely:

The state we’re going to keep here is simply one number. We also set aside an attribute to keep track of what the next state is going to be. Note that we could also create a seperate State object and attach it to the cells, but let’s keep our representation simple for now.

Next up, we define a Grid object holding the cells:

Again, there’s some room for improvement. We’re mixing representational concepts (“what is a grid”) with graphics responsibilities: the size attribute will be used to determine how large the boxes should be when drawing the grid. We could decouple this, but this is fine for now.

Speaking of graphics, let’s also attach a helper and drawing function directly to our Grid (again, we could decouple this in a GridDrawer, but early abstraction is the enemy of getting things done):

The way how we’ll draw our grid is very simple for now: a state of 1 (which we’ll assume as our maximum value) is drawn as a black square, and a state of 0 (our minimum) as a white square, with greyscale values in between.

Let’s also define a function to get a neighborhood of cells for a certain column/row position. The way how we’ll do so is by taking a standard Von Neumann neighborhood, returning the cell itself, and its up, down, left, and right neighbors:

Finally, we need a method that will go over all cells and determine their next state based on a user-supplied rule method:

And we also need a method to finish the generation:

We’re now ready to start exploring some simple systems. The most basic rule set we can come up with is to “keep everything the same”, so for every “tick” where we calculate a new generation, we just do:

Try this out below. Drag the mouse to change the state for the cells. Even though this simulation is running, nothing interesting is really happening here:

As a more interesting rule set, we can use the famous “Game of Life” which defines the following rules:

To make this work, we first need to change our neighborhood definition to include diagonals (called a Moore neighborhood) and to “wrap around” the grid. We don’t need to return all the cells themselves, however, the current cell and a count of its live neighbors is enough:

We can then use this in our tick function as follows:

Which gives us the following result (try scribbling over the grid):

Let’s try implementing a more involved cellular automaton, we’re going to implement Wireworld, a cellular automaton first proposed by Brian Silverman in 1987 and particularly suited to simulating electronic logic elements, or “gates”. Wireworld is Turing-complete, even, meaning that you could simulate a full computer system with it.

We need to make the following changes. Cells can now have four distinct states:

The rule set is as follows:

The neighborhood again includes diagonal cells, but we’re not going to wrap around the grid. The implemented example looks as follows (press p to pause the simulation so you can draw freely — you might need to click in the iframe first to give it focus):

Cellular automata are very versatile indeed. As a final example, let us consider Langton’s Ant. This can be modelled as a discrete agent walking over a grid, but as the Wikipedia page mentions, it’s possible to formulate the behavior by means of a cellular automaton as well. Our state now encodes:

The rule set is as follows:

In fact, we don’t even have to define a neighborhood here, except for knowing to which new cell to move our ant. This simple rule set leads to a beautiful pattern over time (this cellular automaton runs on its own, no way to scribble over it here):

That’s enough for the first part in this series. In the next part, we’ll use the building blocks we’ve constructed and explored so far, and start taking a look at using cellular automata to simulate water, sand, lava, and so on, as is done in several games.