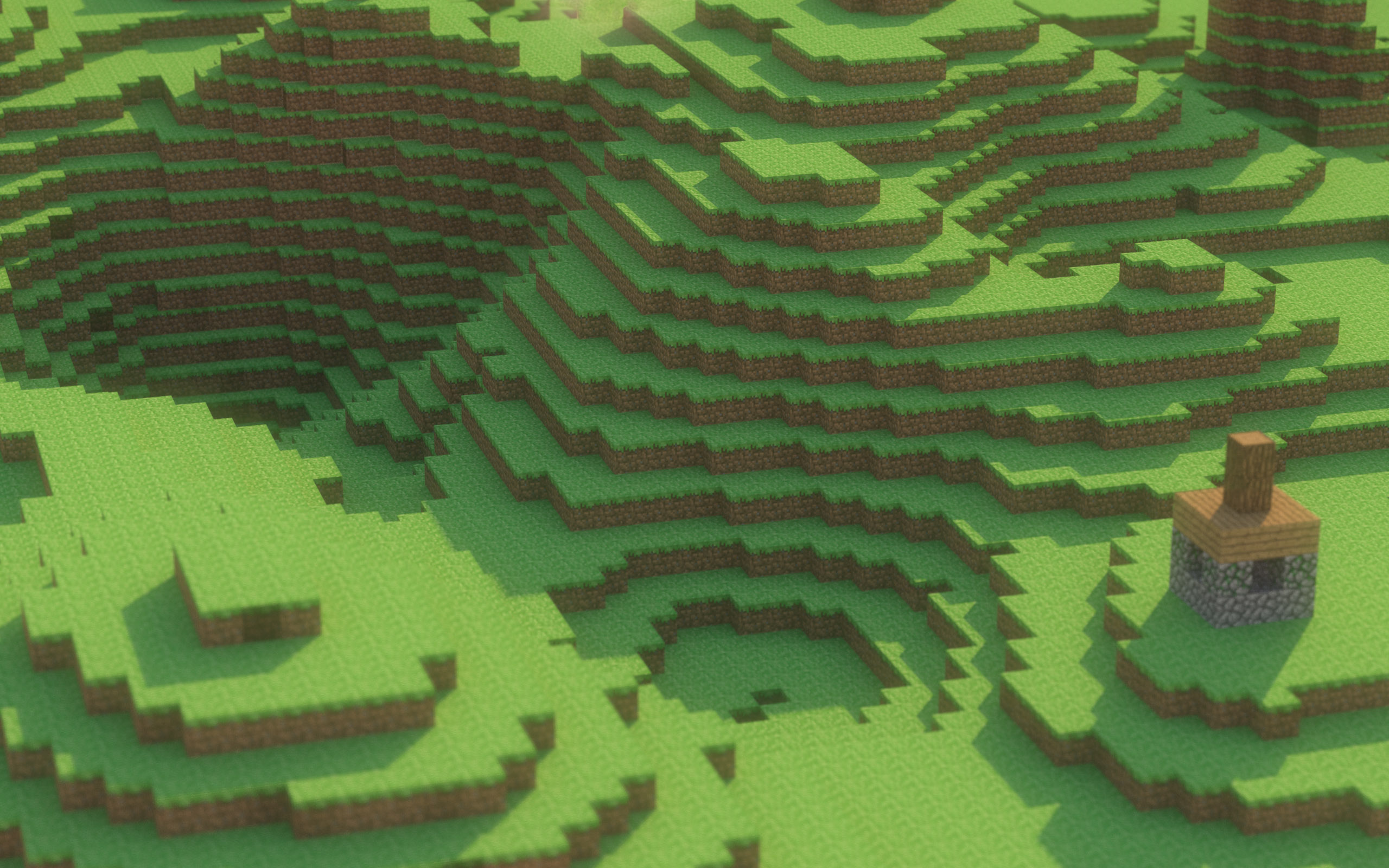 This post describes how you can create a Python interpreter for a Bukkit Minecraft server, providing access to the full internal API. Commands are issued on a separate console window and do not require players or server administrators to be running the game itself.

Unless you’ve been living under a rock, you probably know about Minecraft, the famous open block based 3D building/crafting/exploration/survival game.

Minecraft is a game about breaking and placing blocks. At first, people built structures to protect against nocturnal monsters, but as the game grew players worked together to create wonderful, imaginative things.

It can also be about adventuring with friends or watching the sun rise over a blocky ocean. It’s pretty. Brave players battle terrible things in The Nether, which is more scary than pretty. You can also visit a land of mushrooms if it sounds more like your cup of tea.

Minecraft has been wildly successful. Not only because of the LEGO-like main gameplay, but also thanks to the developers’ friendly stance towards modding, causing an incredible amount of modifications being released, ranging from additional creatures to custom biomes.

Lots of people have also emphasized the fact that Minecraft is a great way for parents to bond with their children. Also in the classroom, Minecraft has been used as a teaching aid to inspire children.

Combine the two aspects above (modding and teaching), and you ultimately start wondering whether Minecraft could also be used to teach programming. When the Raspberry Pi put online their announcement that a special Minecraft version would be available for their miniature, cheap computer, the answer to this question indeed seems to be: yes, since their “Minecraft: Pi Edition” would come with a programming Python API built in, as shown by the following screen shot. Back on the PC-side, the great interest in modding Minecraft eventually led to the Bukkit project — a community-created Minecraft server with a comprehensive API to allow others to create plugins, extending the world, gameplay and rules of the vanilla Minecraft experience. Minecraft server administrators also enjoy having some sort of console available to be able to modify a Minecraft world at runtime. Banning players, erecting or destroying structures or changing the time of day without having to restart indeed comes in handy when you’re running a server. The Bukkit development API makes it very easy to create such kinds of plugins, but they often require the list of possible commands to be specified beforehand (in the Java plugin), which are then made available through the game’s chat window. For instance, issuing the command:

Would mean that you have a plugin running which is able to handle the command /weather and converts this to appropriate Bukkit API calls, e.g. setThundering.

Other than that, lots of people have started to learn Java or other languages by trying to create a Bukkit plugin or some sort of Minecraft-inspired clone. Following list provides just a tad of what is out there:

We’re thus going to create a Bukkit plugin which gives server administrators or programming students direct access to the full Bukkit API. The actual plugin is actually very simple, thanks to the magic of Jython, a Python implementation in Java which allows for Python<->Java crosstalk and saves us from having to implement any command in the plugin itself. Commands are issued on a separate console window and do not require players or server administrators to be running the game itself.

The basic idea behind what we’re going to do is certainly not new by any means. The Minecraft: Pi Edition, as mentioned above, implements a similar idea (see also this article). The Mag Pi magazine even featured a nice tutorial to show off what you can do with it.

Other than that, there’s ScriptCraft, providing a Javascript based programming interface for Minecraft:

You can find more information about ScriptCraft here and here. It’s certainly a great project to teach programming, but comes with the drawback that it offers programmers its own API (implemented in a Bukkit plugin), meaning that you’ll have to program using Bukkit chat commands, for instance:

This is all nice, but still too high-level. I want to be able to get direct access to all Bukkit’s API functions (not only exposed ones through a plugin), preferably not having to use the game’s chat.

ComputerCraft also inspires people to learn coding, but is even more high level. It actually provides a “console block” in the game offering a rudimentary shell which has nothing to do with the inner workings of either Bukkit or Minecraft.

Finally, plugins such as PyDevTool and RedstoneTorch come closer to what we want to achieve. For instance, PyDevTools allows to:

This is almost exactly what I wanted to build, but still requires to log into the game to execute /py <statement> commands. Yes, these can also be entered in the Bukkit console (offering some kind of interactive shell), but I wanted to remove the /py clutter. A simple trick indeed will allow us to do so, let’s get right to it…

We’ll be using Eclipse to make our Bukkit plugin. I’ll assume you know how this IDE works already. If you’re not familiar with Java and just want to try the plugin, you can skip this section. Otherwise, follow along.

First of all, we’re going to create a new Java project in Eclipse. I’ll call this BukkitConsole. We create a plugin.yml file in the project root with some basic information:

Next up, we create a lib folder in which we’re going to place two libraries:

Add these libraries to the build path. You’ll now have the following structure:

Next, we’ll create the plugin classes themselves. Create a package under src called com.macuyiko.bukkitconsole. We’re going to add two classes.

MainPlugin.java, this class just loads the libraries from the lib folder and spawns a PythonConsole window:

PythonConsole.java, this class employs Jython to execute start.py in the python directory:

That’s it for the Java side! Export your project to bukkitconsole.jar.

We’re now going to setup the server. Create a folder server somewhere. Next, download craftbukkit-*.jar from here (Bukkit is the development API, “CraftBukkit” is the actual server; again, more info on the Wiki) and put it in this folder.

We’re also going to create a simple run.bat in this folder:

Execute run.bat to see whether CraftBukkit works fine and if you can connect with your Minecraft client (note: if you’re running the current snapshot, the launcher should allow you to create a profile with version 1.5.2, which is what we’re using here). Normally, you should get something like:

Enter stop to stop the server. CraftBukkit will have created some new folders in your server directory:

Next, we’re going to download a Jython console. I picked this one by Don Coleman, since it is simple and offers fairly robust code completion. Note that I had to make some changes to it which can be found on the GitHub repository I’ve created for this project. Not using these changes is okay but will lead to some error spam on the Bukkit console.

Create a folder called python in server and extract the Jython console. python should contain:

We’ll also create a file start.py in this location with the following content:

We also need to create a lib folder in server and put in the following JARs:

Yes… the same ones we’ve included in our Eclipse project. It would have been possible to package these into the JAR, but loading in resources from JAR files is a bit of a pain which I didn’t want to go through. Feel free to add lib and python to the JAR and submit a pull request on GitHub if you get things working.

That’s it. Try executing run.bat again. If all goes right, Bukkit should be able to load in our console plugin and will present you with an interpreter:

The Bukkit API docs provide a full overview of all that is possible with the complete API. Broadcasting messages, changing inventories, changing worlds, spawning lightning, all is possible.

You can also save functions in Python scripts if you want to. For example, try creating a scripts.py in the server folder:

Now, in the console, we can:

Which will explode a player with a lightning strike to warn other outlaws. The server administrator’s “command center” now looks like this: 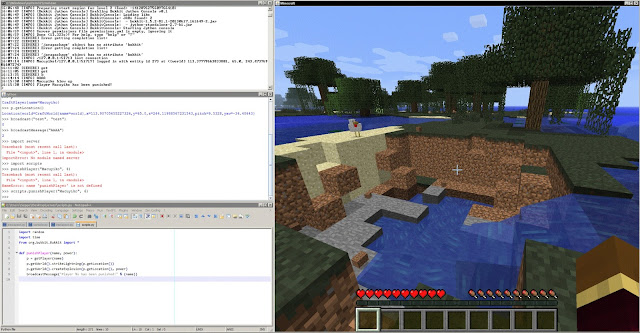 We’ve now created a Bukkit plugin spawning a Jython interactive console which is able to use the full Bukkit API. This is a nice starting point to create administrative support scripts, in-game games, or course material for a Minecraft Python programming course.

(Added 2013-07-16) There is still “one more thing”, however, which prevents our plugin from being useful for “real” server administrators: the fact that it relies on GUI capabilities being present. It would be nice if we would be able the just spawn an interpreter on the console. Doing so, however, is not particularly trivial. One might be tempted to just start a code.interact() loop to do so, but this method comes with several drawbacks:

(Added 2013-07-18) Next, I opted to create a socket based listening server which listens for incoming connections and presents a “remote interpreter” to the user. This is great, since it also allows non-local access. Still the implementation (created as a Python script loaded by the plugin) was a bit hacky and contained some drawbacks:

As such, we create two new Java classes. SocketServer.java handles the incoming client connections and creates a ConnectionThread.java thread per client. For each client, a new InteractiveInterpreter is spawned:

Finally, MainPlugin.java is modified to read in config values from a config.yml file with following defaults:

Once done, the plugin is able to start both a GUI interpreter locally on the server, or bind a remote interpreter server to a chosen port, waiting for clients to connect. A session (using telnet might look as follows): Two special commands exist. exit! exits the session whereas stop! will completely stop the socket server (not allowing any new connections until Bukkit is restarted). Just as with the GUI interpreter, it makes sense to from org.bukkit import Bukkit before entering other commands for convenience’ sake.

The source code for this project can be found on the following GitHub repo. The repository also hosts everything you need to get running without having to code/compile anything. Feel free to modify both the Python and Java sources and submit pull requests with improvements. I’d also love to hear about any cool or interesting things you do with this.

Note that the default configuration for the repo project will spawn both a GUI interpreter and a listening server (at port 44444, password “swordfish”). If you want to change this, simply modify config.yml which will be created in plugins/Bukkit Jython Console/ after starting the plugin for the first time.

Finally, if you’re interested, the following video shows some more tinkering. (Protip: I’m a bit awkwardly using alt-tab and the inventory screen here. If you press T to start typing in chat, you can alt-tab out of the game without pausing or having the inventory screen opened, which allows you to better see what’s going on.)