Legacy note: this program was pretty popular around 2010-2012, but now has fallen out of use, since most games have been patched to prevent this issue. The source code and last binary release have been moved to GitHub, as Google was thinking it was malware and flagging my blog.

Recently I wanted to play an old favourite of mine: Age Of Kings: The Conquerors. The game had been running fine all the way from Windows 98 (and NT 4 as well, which was a pain to play games on at the time, but I digress) until Windows Vista. However, with Windows 7 - which I’ve been running happily for some time now - I stumbled on a roadblock: the colours were all wrong.

This is not an uncommon problem. Many people have had problems when running the game on Vista or Windows 7, this is how you could describe it: 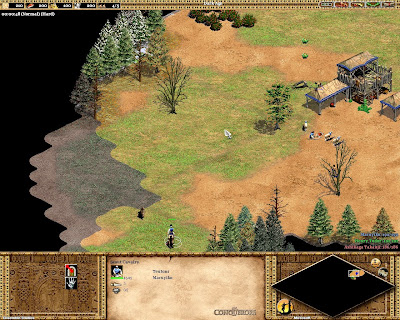 The thumbnail doesn’t really bring it out, look at this (“zoom, enhance”): 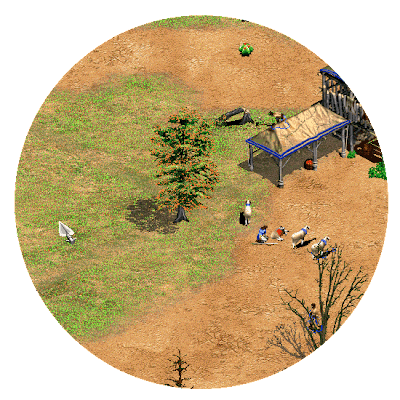 The tree has an ugly red border around it and the grass turns too green (your experience might be worse).

Age Of Kings isn’t the only game with this problem. Basically a lot of old Directdraw games suffer from this problem, like the first Age Of Empires, Worms Armageddon, and even Starcraft: 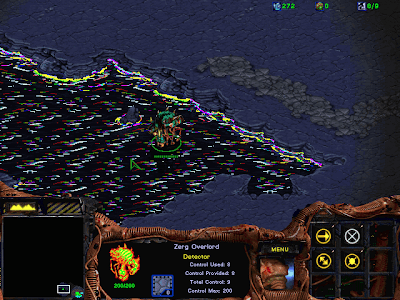 It’s not too bad here though, most of the terrain looks okay.

There are a few different solutions floating around. Let’s list the most common ones. I’ve also listed how well they work next to each number, so you can quickly scan the list. Newest and best performing methods come last.

Most methods below are unreliable, or do not work with everyone. Most of them are pretty annoying and/or hard to execute as well. If you want better solutions, just skip this part…

(1 - unreliable) Alt-tab out of the game, and then maximize it again. This worked in XP (and in Vista for some users), and works in some cases in later versions of Windows. I had no luck with this anymore though. The colors would work for a few seconds, but then changed again.

(2 - unreliable) Change your in-game resolution. Doesn’t work in Windows 7 or later anymore either. After switching resolutions, the colors even became worse. This might work in Vista, but this solution is not really preferred (you want to play on the best resolution possible).

(3 - unreliable) Before starting the game, open a explorer window. My Computer, a random folder, anything works. Surprisingly, this often worked in Vista with most Directdraw games. In Windows 7, not anymore.

(4 - unreliable) Mess around with the compatibility options, especially Run in 256 colors, Disable visual themes, Disable desktop composition, Display display scaling on high DPI settings and Run as administrator. This works for some games/users, but I don’t really like this method as it has a lot of drawbacks (desktop windows/icons messed up when you exit etc…).

(5 - mostly reliable but annoying) Close explorer.exe using the Task Manager. This works for most games, but if you’re like me, you don’t like to close your 5+ open explorer windows.

This method has been added to the program (see below). Another way is to create a batch script, if you don’t want to use the program:

(6 - mostly reliable but annoying) Download a mod or tool for Age Of Kings: The Conquerors to play it in windowed mode. You can get it here. Unzip the archive into your installation folder, and run AoC.eXe. If you want, you can also mess around in the config.xml file to change some options. This is how it looks: 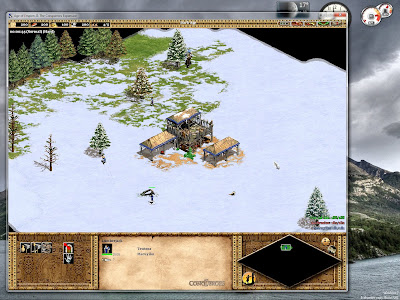 On my large monitor, I actually enjoy playing this way.

There are other mods out there for other games which allow to run them in windowed mode. For Age Of Empires: Rise Of Rome, you can get this mod. Or you can get DxWnd which forces Directdraw (DirectX >=7) games to run in a window. I had no luck with it for The Conquerors however. For Starcraft, there are also some tools floating around to fix the resolution/window/colors. For Worms: Armageddon, CyberShadow is working on a fix for the game (see here), so you might want to keep an eye out for that.

(7 - mostly reliable but annoying) This is the newly found strange “Screen Resolution”-method. Found on this forum recently. This is a weird workaround but seems to work on every game I’ve tried. Follow these steps exactly: right click on your desktop and pick Screen Resolution. In the Screen Resolution window, click Advanced settings. Another window will open - click the Monitor-tab in that window. Now, leave these windows open, and start the game.

You’ll find the easier, newer and more reliable methods in this section.

(8 - reliable) Download a tool I whipped up to play Directdraw games in fullscreen without them changing colors. This tool will act as a launcher which places itself in your notification area and automatically suspends all applications which are changing the game’s colors and will bring them back alive when you close the game

(9 - reliable) Thanks to this a reader comment, I found out that Windows 7 actually provides a compatibility hack build in to allow running old DirectDraw games in all their glorious colors. The HKEY_LOCAL_MACHINE\SOFTWARE\Microsoft\DirectDraw\Compatibility\ registry entry (or HKEY_LOCAL_MACHINE\SOFTWARE\Wow6432Node\Microsoft\DirectDraw\Compatibility\ for 64bit Windows) contains entries for some popular games, such as Age Of Empires and Starcraft.

Then why are those games not working right? It turns out that the ID used in the registry entries are very specific to the game version. You can follow along with this blogpost to find out all about this hack.

If you don’t want to download procmon to figure out the application ID yourself then you can download a tool by Mudlord called “w7ddpatcher.zip” (you’ll have to Google around). The source code is included, and looks clean. To use it, open the w7ddpatcher.exe executable, and press Patch to add a DirectDraw application to the registry. After patching, the game should always work with correct colors, and you won’t have to use the program every time you want to play the game (unless you change the executable e.g., by updating the game).

(!): note that this tool might not work with Windows Vista or XP, I’ve only tested it with Windows 7 myself. If you’re using XP, you’re probably better off using my tool (see #8 above), since it probably doesn’t come with those registry entries. Also, the tool won’t work out of the box for Age Of Empires 2 (and other SafeDisc using games), as that game needs an entry for age2_x1.icd instead for age2_x1.exe, as stated on this forum thread. Take a look at HKEY_LOCAL_MACHINE\SOFTWARE\Microsoft\DirectDraw\MostRecentApplication to find out the correct application ID and edit the registry entry manually accordingly.

(10 - reliable for certain games) A few days ago, this writeup from Jari Komppa got my attention. This coding wizzard has programmed a custom ddraw.dll which wraps all DirectDraw calls and redirects them to an OpenGL surface. Tip of the hat to this guy. Download the DirectDraw Hack DLL binary from his site and put it in the same directory as the game executable you’re trying to run. It should work for Wing Commander, StarCraft 1, WarCraft 2, Fallout and Fallout 2.

(!): the DLL alas, does currently (as per last update to this blog post) not work for Age Of Empires 2. So I’m still shamelessly plugging my tool for that game (see #8 above).

If you’re interested in a little background on why this problem is happening, read on.

When I first encountered this problem, I already knew a little about DirectX, the GDI and the Windows API. Basically, back in the day, DirectX (which handles a lot of the graphics and multimedia workload in games and other program) included a component called Directdraw, used for rendering 2D graphics.

PCs back then weren’t really powerful. Everything had to be as fast as possible, even color handling. So something which Directdraw did for you was maintaining a palette of 256 colors. Like a painter, programmers could fill this palette with 256 colors they would use: ten greens for grass, 6 blues for water, and so on. Some of these 256 colors are static (but then again, not always) and cannot be changed. If you’re interested in the deep and dirty details: this page does a good job explaining it.

Now this is the thing: if you’re a fullscreen game, you don’t want other programs screwing up the system palette, changing your beautiful chosen colors to ugly greens and reds. And this is what’s happening in Windows 7. If you read System Palette and Static Colors on MSDN, it states that “However, because changing the static colors can have an immediate and dramatic effect on all windows on the display, an application should not call SetSystemPaletteUse, unless it has a maximized window and the input focus.” Alas, this is not enforced by Windows, and thus explorer.exe (which comes from Microsoft mind you) and other programs will happily call SetSystemPaletteUse and mess the poor fullscreen DirectDraw game up.

I googled a bit around to see if I could find any clues. This message at Stackoverflow describes the same problem. This message is actually posted by the maintainers of Worms: Armageddon. No-one provided an answer though. I opened up Visual Studio (which was still installed) to quickly throw something together in VB.NET to intercept the WM_SYSCOLORCHANGE, WM_PALETTECHANGED, WM_PALETTEISCHANGING and WM_QUERYNEWPALETTE messages and look at where they’re coming from. Basically, three processes are fighting:

The game itself, explorer.exe, and csrss.exe.

I then wanted to make a program which would change the palette back every time an outside process tried to change it. A had a whole list of functions loaded and code written, but it just didn’t work out and turned out to be too difficult. Also, I was beginning to suspect that this method could work, but would still result in flickering while changing palettes. I was browsing around at the Worms Armageddon forums, and found out that somebody wrote a DLL with source code for this problem. The code was written in Delphi and easy enough to read: grab a process, find every thread, and send the suspend message to every thread. I converted this code to VB.NET and slapped it on a form which would grab every WM_PALETTECHANGED message to update its list of processes.

Note that there is actually also a lesser known way to suspend a process with one API call, without iterating all the threads, which is used in the PsSuspend- and Process Explorer tools made by SysInternals: