The following steps are instructions to surf the web using a Nokia N95 with 3G, connected to your Intrepid laptop via Bluetooth.

1. Make sure you have the required packages installed:

2. Find out the phone’s MAC address. Enable Bluetooth on phone and laptop, and enter the following command:

And note your MAC-address of your phone.

3. Find out the phone’s channel, with the N95, this might change from time to time:

There are a few lines which you might need to change. I’m using the Belgium Proximus operator.

First of all, change /etc/chatscripts/proximus-gprs to something more related to your provider (e.g.: /etc/chatscripts/myprovider-gprs). We’re going to create this script in the next step. Also: you might need to change the ms-dns entry as well (in most cases you can leave it out, but I had to add it though). Also notice that I have used /dev/rfcomm1 as the used device, we’ll use this in the next steps as well.

Note that you may have chosen a different name for your chatscript in the previous step.

Replace RFCOMM# with the /dev/rfcomm-number you’ve used before (only the number!), I’ve used 1. MAC is your phone’s MAC address again, and CHANNEL is the channel you found earlier.

If all went well it should say:

Now we’re going to enable the PPP connection, in a new terminal window (keep the “CTRL-C for hangup”-one open), enter:

BluetoothDialup is the filename of the file we have created in /etc/ppp/peers/ earlier in step 4.

If all went well you should see an entry now in your ifconfig output:

If you’re done surfing the internet, turn off PPP:

Press CTRL-C in that other terminal window to break the Bluetooth/3G-connection.

Note: if you’ve done something wrong (e.g.: used the wrong channel), you can release rfcomm’s with:

With RFCOMM# equal to the /dev/rfcomm-number you’ve used before.

Optional steps: use gnome-ppp to connect

If you have gnome-ppp installed, you can also use a graphical interface to configure the above steps.

First of all, you still have to execute:

But you don’t have to create the files from steps 4 and 5. We could automate the connect-step as well, but since the N95’s channel changes from time to time, this wouldn’t be very convenient. Also, I like having a terminal open to notify me that I’m still surfing via my phone.

Then open up gnome-ppp. If you have to enter a blank username and password for your provider, just enter some dummy values. I used “blank” and “blank”.

Again, change this for your provider! I also had to manually define a DNS in the Networking tab, just like in the previous steps. This might not be the case for you.

You’re done, make sure you’re not wired or wirelessly connected to test this :). 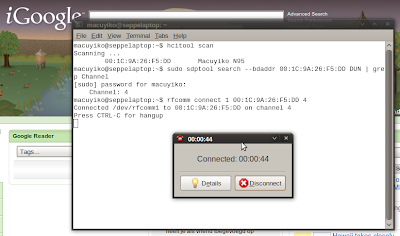 Final note: some people have to add novj to /etc/ppp/options as well. I didn’t, tho. Check the Ubuntu forums/Google for information about your specific operator and/or hardware.

These instructions were only tested with my Thinkpad, my N95, and my operator. I’ve set up laptops with Vodafone cards before, and you can use gnome-ppp for those as well, just make sure you’re using the correct device. Often the device will be at /dev/ttyS0, but use dmesg to find out the exact location.