(This is part 2 in the Modern Genetic Algorithms Explained series, click here to go to the first post, or browse through all the parts with the Table Of Contents at the end of this post.)

Let’s take another look at the blog post on which we will base ourselves on. A general genetic algorithms can be described as follows:

There are still a lot of gaps to fill in: how large should the population be, how do we construct individuals, which fitness function do we use, which selection methods are available, how do we evolve the population, should we mutate? If yes, and how?

Population and Individuals: Encoding and Construction

How do we construct individuals? Certainly a simple (and popular choice) is the bit-representation:

When evaluating the individuals, those bits are converted in something meaningful, be it numbers, strings, or other symbols, depending on the problem.

If we had used this representation, an individual for the problem described in the article (find x numbers each between a and b so that the summation of those numbers equal z) would look like this (e.g. x = 4):

Which would represent 4 numbers between zero and 255: 103+69+213+215. Also notice that our individuals have a fixed-length. Variable-length is a bit more complex, but also possible, and sometimes needed.

What do we do if the number lies out of the permitted bounds? We could: (1) Avoid that situation by making sure we never generate an individual with a number < a or > b. (2) Permit those individuals, but assign a very low fitness score to them. In the article, the score is calculated as the absolute difference between the sum of the individual’s numbers and the target value. So a score zero (0) means perfect fitness: a valid solution. In this case, invalid individuals would get a score of 1000, for example. Or even better, we evaluate it normally, but then add a “penalty”. E.g. the absolute difference between the bounds and the numbers times two.

Why would we use (2)? In some cases it is too difficult or too time-consuming to check every individual to see if it is valid, before putting it in the population pool. Also: permitting invalid individuals might still be useful. They can introduce more variety in the population, and their valid parts can still be used to create offspring.

Why would we use this representation? As we will see in the following steps, a crossover between two individuals will happen to create new offspring, with a bit representation, the crossover point can be placed at any point:

Bit-representation is thus often used when it is not clear how to place the crossover point, but when we do know a way to “convert” a solution to a bitstring. However, always watch out. Some representations become too sensitive to “random” tinkering with bits, making them quickly invalid. In our case: using a bit-representation would be permitted (changing a random bit still creates four integers), but in other cases this method becomes unfeasible.

Good, we now have constructed an initial population, containing, say 100, individuals. We also have a fitness function to assign a score to each of them. Lower is better, 0 being a perfect solution.

How do we pick individuals to use to create offspring? We’ll need two individuals (a father and a mother). A first way (1) to choose them might be: just pick them at random. Of course, it is ease to see that this is a bad way of choosing parents. There has to be a relation between the fitness and the selection, so that better offspring can be created. When we choose parents at random, bad parents have an equal chance of producing children than fitter parents. (This is against the ‘survival of the fittest’-idea, on which genetic algorithms are based on.)

In the article, a second (2) method is used:

This is certainly a better option, but this way, we completely abandon the lower scoring individuals. It is always better to give even the worst individuals a little chance to be a parent, to maintain a higher level of possible diversity.

With that remark in mind, we arrive at a third (3) solution, the roulette-wheel selection method: the chance of each individual to be selected becomes: fitness of that individual / total of fitness scores of every individual in the population. For example, consider the following population of five individuals, ordered by their score (let’s say that higher is better).

Note that p can be = 1. Then the best out of k individuals is chosen, this is fairly common. For k, often 2, 3, or 4 is used. This is an often-used method because it is easy to implement, and can be used in parallel environments. Note that when p = 1, k = 1 this method essentially becomes a pure random selection.

Now that we know how to select two parents, how do we create children? Again, there are many techniques here. The first one (1) is the one-point crossover (simple crossover). I will illustrate the following examples with bit-represented individuals.

The second (2) crossover method is two-point crossover, and looks a lot like the previous method:

Cut and splice (3) is another one, and is only interesting when you need variable-length individuals. I will skip the description, it’s in the Wikipedia page (all sources are mentioned at the end of this post).

In our reference article, a single fixed crossover point is used, placed in the middle.

Now that that’s out of the way, there is only one aspect to look at: mutation. This phase makes sure that there is enough randomness and diversity in the population. Again, there are different options.

First (1) of all: no mutation. For example when their is enough diversity by using smart selection and crossover methods, or when the optimization problem is as such that there are no local maxima (more about that a bit later).

A second (2) method: take N individuals out of our population, and change each of their bits/values with a P chance. Often: N is equal to the complete population size, with P a very small value. Or:

(3) Take N individuals, pick K bits/values in every individual, and change those bits/values. Again: N is often equal to the complete population, and K also low (one for example). This is the method used in the article.

Sometimes, also the following additional (4) method is used: create offspring equal to (P-N), with P being to population size and 0<=N<=P, then add N random individuals. When this method is used, often values like N=P/5 to P/10 are used.

A problem involves: given a constrained plane and a few randomly placed circles, how can we place another circle so that the radius is maximal, without overlapping the other circles. You can download and try it for yourself here (all sites are also mentioned at the end of this post).

Before the evolution starts, the situation looks like this:

After only 61 generations, we are coming close to the optimum:

Another really cool example can be found here. Be sure to download the binary and test it for yourself: 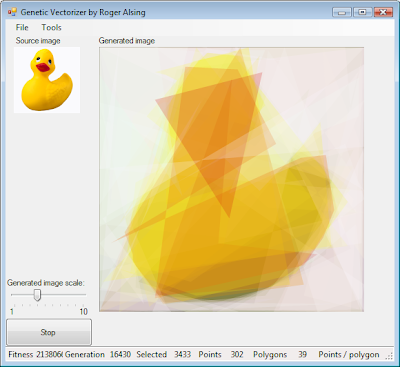 This site implements a Traveling Salesman Solver with a GA Java applet: 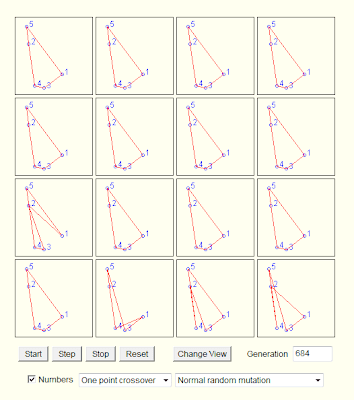 Finally, using the code from the article:

After 14 evolutions we already see a perfect population, not bad… Do note however that this is an extremely easy problem: there are many optimum solutions.

Genetic Algorithms are not perfect, nor are they a silver bullet. When badly configured, genetic algorithms tend to expose the same flaws as stochastic hill climbing indeed: a tendency to converge towards local optima.

It’s not hard to construct a GA which will tend toward the global maximum, even without mutation or introducing much diversity. Consider the following animation, with the green dots representing a few individuals:

However, when you consider the following function:

Notice that there is one individual tending towards the local maximum, but the others “pull” it towards the global one. However, the following could also happen:

To prevent these situations from happening, we have various options at our disposal: (1) Choose sensible parameters. Population count, selection- crossover- and mutation-methods. Try to find a balance between enough diversity and fast convergence. (2) Run the GA multiple times, take the best solution. (3) If the population converges towards a certain solution, randomly regenerate the N worst members of the population and continue evolution (a similar technique could be used in the mutation stage). (4) Use parallel solutions. A parallel genetic algorithm executes multiple populations at once, often on many computers (or a cluster). Often, there is an extra migration stage added, in which individuals migrate from one population to another.

Wow, what a lot of text! If you’re interested in knowing more, check the following links:

There are a lot of software implementations around for genetic algorithms, most of them are written in C, C++ or FORTRAN77, but recently languages such as Java and Python are becoming more popular.

In the next section: we will explore a particular GA implementation: CHC by Eshelman.